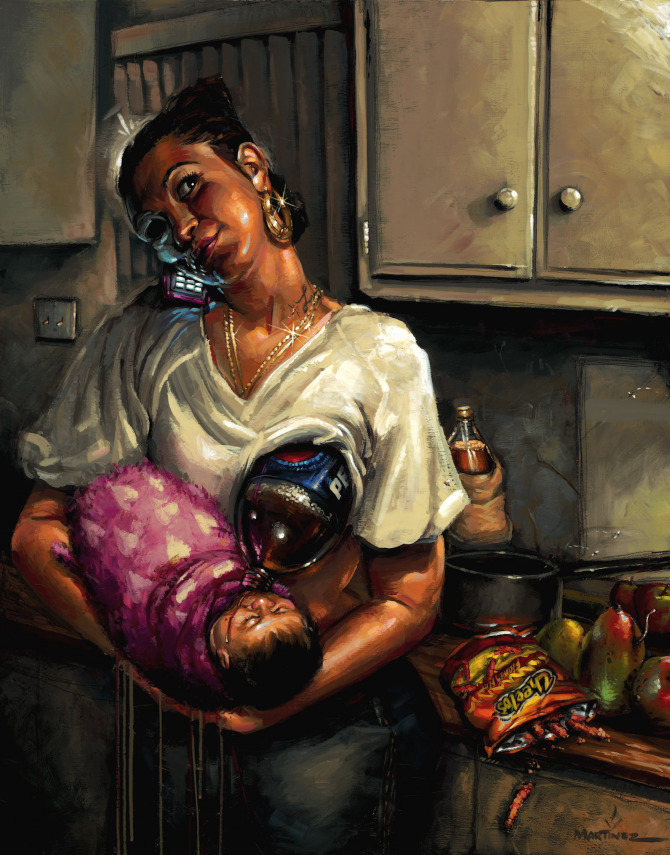 A good friend recently discovered this jarring image of the “high fructose life” we are passing down to our children. It was particularly difficult for me to see, given the reading I’ve been doing on the value of breastfeeding instead of formula – let alone Coke! And though I know sodas and chips and fast food were revelatory in their time, and freed up women from having to keep one foot constantly in the kitchen in case someone was ever hungry, and cell phones and instant distance communication have expanded the economy, productivity, and allow those of us with friends and family elsewhere to stay in touch… All good things in excess can be poisonous. Particularly when multinational food companies and subsidized monoculture corn fields and mass-distributed high fructose corn syrup gets involved. This image beautifully captures the absurdity of our world.

It also reminds me of a piece I wrote recently on a similar topic.

Shake and bake taught me to make chicken. Suddenly salad schooled me in the ways of spaghetti. Boxed cereals and popeye’s canned spinach and instant mashed potatoes guided me along the path of life, nourishing me with empty calories, lifting my 8-year-old spirits with sugar highs and when the crash came, I sought out slice and bake cookie dough from a plastic tube to pick me back up. Grand’s ready-to-rise bread that “popped” as you unrolled it gave me delight, and orange juice, frozen from concentrate and mixed with a tall wooden spoon made we weak on sight.

Walking through the grocery store with children in tow, three growing bellies to feed, we traversed the aisles like starved scavengers, seeking the canned fruits and vegetables, meat in a box to buy in bulk, whatever we as children could make ourselves since there was no time to cook. Fresh vegetables required effort we did not have. We had few pots and pans – what we used, someone had to clean and that meant less time for eating, for homework, for the daily charade of the single parent game.

And yet there were glimpses of another world, where adults came home before 11pm and helped with homework rather than giving directions for dinner over the phone, calling back 2 hours later to make sure you had cleaned up and gotten the little ones to bed. Another world was possible, a four-hour drive away to grandma’s house that overlooked a quiet lake and island where the geese sat, a lagoon full of lily pads and squatting toads and purple flowers that came up every spring. Of rhubarb and strawberries that tumbled out of bushes into a sweet, tangy homemade jam on bread that I had seen rise the night before and still I felt the heat of its baking on the crust as I swallowed. Better than any candy or any can.

We walked the aisles of her endless garden, digging potatoes and picking cherry tomatoes, checking the ripeness of raspberries as we watched them grow full and red and heavy with pleas to be taken and eaten. We struggled against fish from her boat out in the lake, thanked worms for giving their lives to the fish and in turn thanked the biggest fish with a gratitude learned in silence. We watched them die under the sun in the bottom of the boat, wet with our splashing, heavy with learning and appreciation for that which could never come from a box or in bulk. Fish had never tasted so good as those from our hands.

And when we returned to the city, the land of opportunity yet subtly devoid of silence, of blessings, of a rhythmic ecosystem of breath, it was memory that sustained me. It was the memory of sunshine reflected over the lake and tadpoles that scattered when you dipped a toe off the dock and the taste of ground cherries from hands freshened with dirt that kept my spirit alive in some small way, the way a beautiful sunset lingers even against approaching night. And somewhere within me, when I had escaped from the routine of school, work, homework, shaking and slicing and baking, feeding little ones, cleaning up a destroyed kitchen, and putting them to bed, when I knew I was a survivor and a mother before my time, when I knew I was strengthened against the concrete walls of our existence and even during the moments when I wanted to close my eyes and quit, one thought kept a dim lit hope from being extinguished: I knew my spirit would return to water, to fertile ground, to the feeling of fresh dirt on tired hands that had done work, very much out of the box.